Ever had one of those days?  You know when you feel like there’s one rain cloud in the sky and it’s only raining on you?

Our family was just sitting down to supper when all of a sudden golf ball sized hail started falling from the sky!!  Now, I must preface this with the fact that we knew it was going to rain, but there were no real warnings for anything severe.  In fact, I am signed up for text alerts from our local TV weather station and I got NOTHING prior to this outbreak of hail! (Ironically, I received many texts following afterwards…but nothing before!)   I know there isn’t much we could have done, but it still seemed to come out of nowhere.

Needless to say, the whole family  left the table to watch the hail. I took my phone to take pictures and my son took his iPod to do the same.   I was amazed at what I saw.  What was falling from the sky was about the size of my fist, but as it hit the ground it would break into pieces many still larger than quarter sized hail.  After about 15 minutes of being in awe (and horrified) at all that was falling, the storm took a turn for the worse.  Not only was more hail falling, but it had grown in size as well!  (Not a good night to be a shingle on a roof…OUCH).  So much hail fell that within minutes it literally looked like we had snow on our sidewalks and deck!

Fortunately for me, my dad is our insurance agent so I gave old pop a call.  (How many people get to FaceTime their insurance agent? I know, I’m lucky…) He told me to continue taking pictures and videos and of course wanted to make sure we were okay and no windows had busted considering what he watched via my phone.  The first time I called him I thought it was pretty bad…and that was before it got worse….and THAT was before we got hit the second time!!  I gotta say I’m pretty sure we’re going to have a claim on our roof, our pickup and possibly more.

I have to say that as a former science teacher (and daughter of an insurance salesman…), weather fascinates me.  You take something like water and air – two life-giving resources – and turn it around to cause unbelievable damage and ruin.  How does that happen?  Isn’t that in itself intriguing?  The very things we need to survive can also harm or kill us.  Mindblowing, really.

I grew up in Kansas where severe weather popped up like a jack-in-the-box.  If it was spring, look out.  At any moment something bad might hit.  We lived in a small farming community in south central Kansas, so when storms hit, dad’s office would be swarming with calls and people.  Since my dad was one of TWO insurance agents in our county, it was often his job to go out and take pictures of the damage.  As a kid, I would travel with him to take pictures and then as a young adult, I would go and take the pictures for him. We got LOTS of tornadoes.  Tornadoes are so weird.  I can recall on more than one occasion where two country homes would be sitting side by side out in a field and one house would be leveled and the other untouched.  Not even a window would be broken.  I’ve seen cars in trees and straw through telephone poles.  There’s even a documented case of a cow being moved 4 times in its life by a tornado and surviving each “relocation” process!!  That’s Kansas weather for you.  I will say Nebraska weather doesn’t seem to be as eventful as Kansas but considering the weather reports for this week, I feel like it’s trying out for the top spot in Tornado Ally.

Hail is also tricky.  It can hit a very small area and leave the surrounding areas completely untouched.  For instance, last night we had about 2-3 inches of hail accumulated on our deck and not even a ½ a mile away, our “neighbors” had nothing.  Not only that, but the storm didn’t seem that strong or severe.  I’ve experienced some severe thunderstorms, but this storm brought little thunder, not much wind and though later that evening our tornado sirens went off, it really didn’t amount to much.  Usually in a bad storm we lose our satellite dish signal – not last night though!  We had a full signal (save about 5 minutes) throughout the entire evening.  The other odd thing about this storm was how long it lasted.  We had hail constantly falling for at least a 30minute period.  It just kept coming.  After about an hour it let up enough for us to survey the damage, but within the hour we got hit again by another storm.  And guess what it brought?  More hail.  Again, I was really feeling like the cartoon above.  Why do the neighbors have birds singing in their trees and we have hail in ours??

You’ll be happy to hear that in spite of all the damage that hit our home, our pump trucks were protected and unharmed by the elements.  I know I had everyone on the edge of their seat saving that little tid-bit of information.

So, we might get hit again tonight, but what do you do?   There’s not much you can do about it, so why worry?  Weather reports tonight say it could be worse than last night.  I suppose if life gives you lemons and you’re supposed to make lemonade at least with hail we’ll have ice for our glasses!! 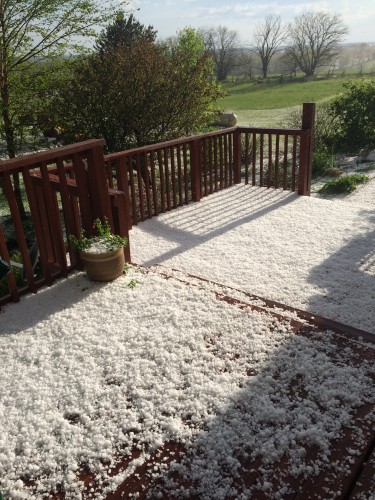 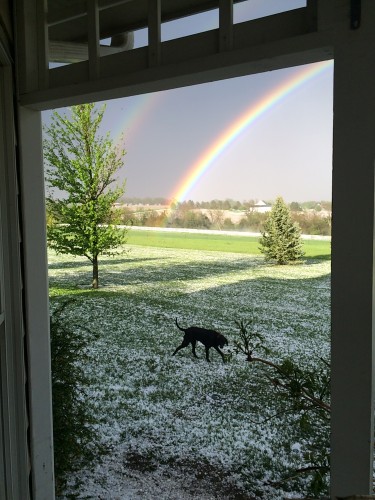